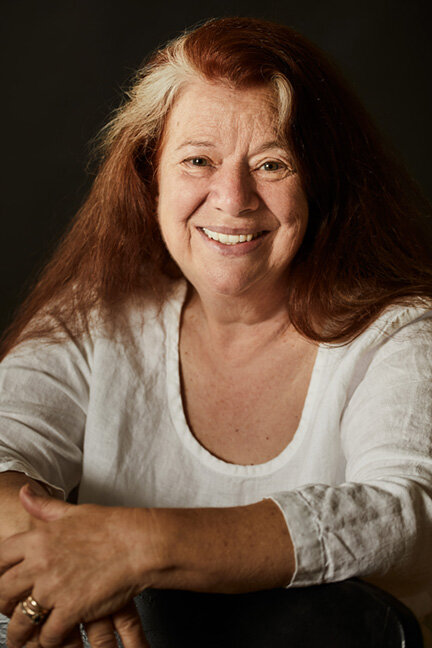 My images of water, rocks and trees are filled with purposeful energy. Water is in constant motion, just as our own footsteps are endlessly moving, circling, coming and going, leaving and returning. Forces of nature compete and collide. Shapes within my compositions push against one another, intertwine, overlap and recede into space. Sunlight, as it plays across landscape forms, invites contrast in darkness and calls to the colors in shade and shadows. I achieve a deep three-dimensional space with the use of overlapping and application of colors – from light to dark with all stops in between and from warm to cool. I make my large mixed media paintings based on field drawings and watercolors painted on site in nature. I find essential shapes to convey my story and then apply paper collage glued to the linen over custom stretchers or on wood panels. An archival sealant is applied to prepare the paper to receive oil paint. My final surface of oil paint gives my work depth and finish.

I seek the universal in choosing my compositions. I want people to understand what they are seeing and relate it to their own lives – even subconsciously, feeling its energy in their own bodies or comparing the “characters” they see – rocks, trees, streams, roots, foliage- to aspects of their own experience, their own struggle for survival, their feelings of being rooted in home or routine, the flow and resistance they might encounter in life. We are all standing on one planet. The rivers of the earth and the clouds above are all one system, always changing, part of everyone’s experience, ever beautiful, in constant motion. 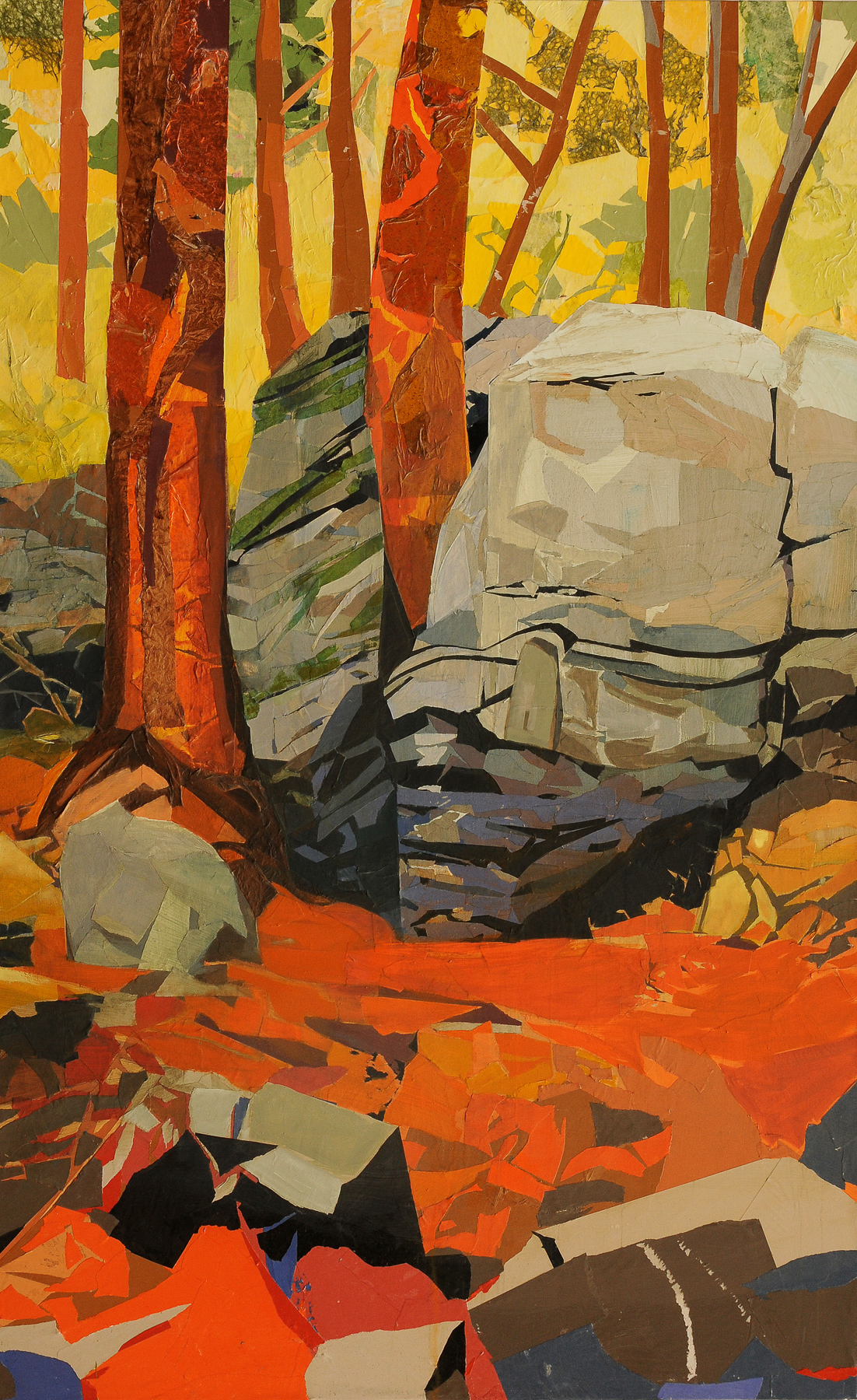 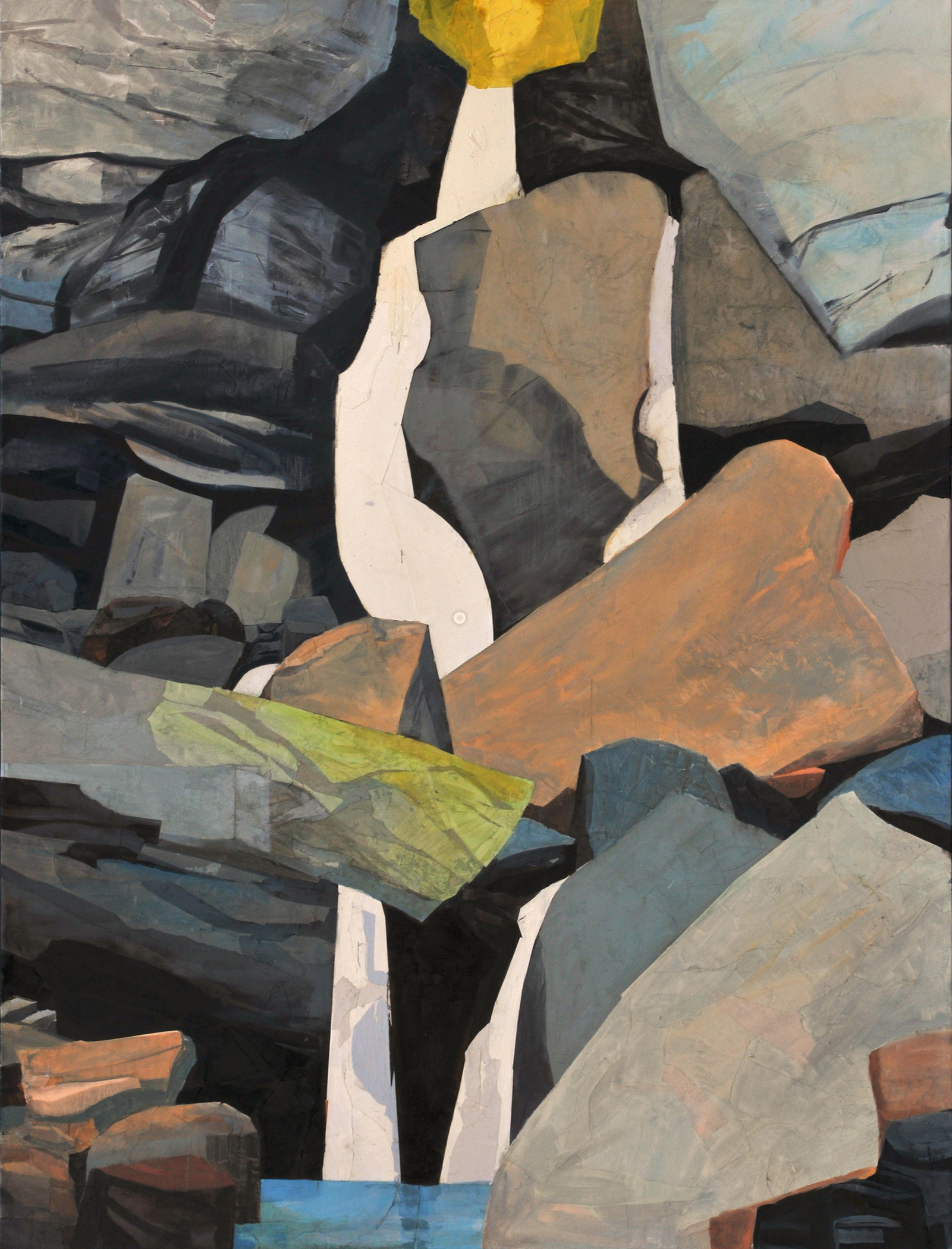 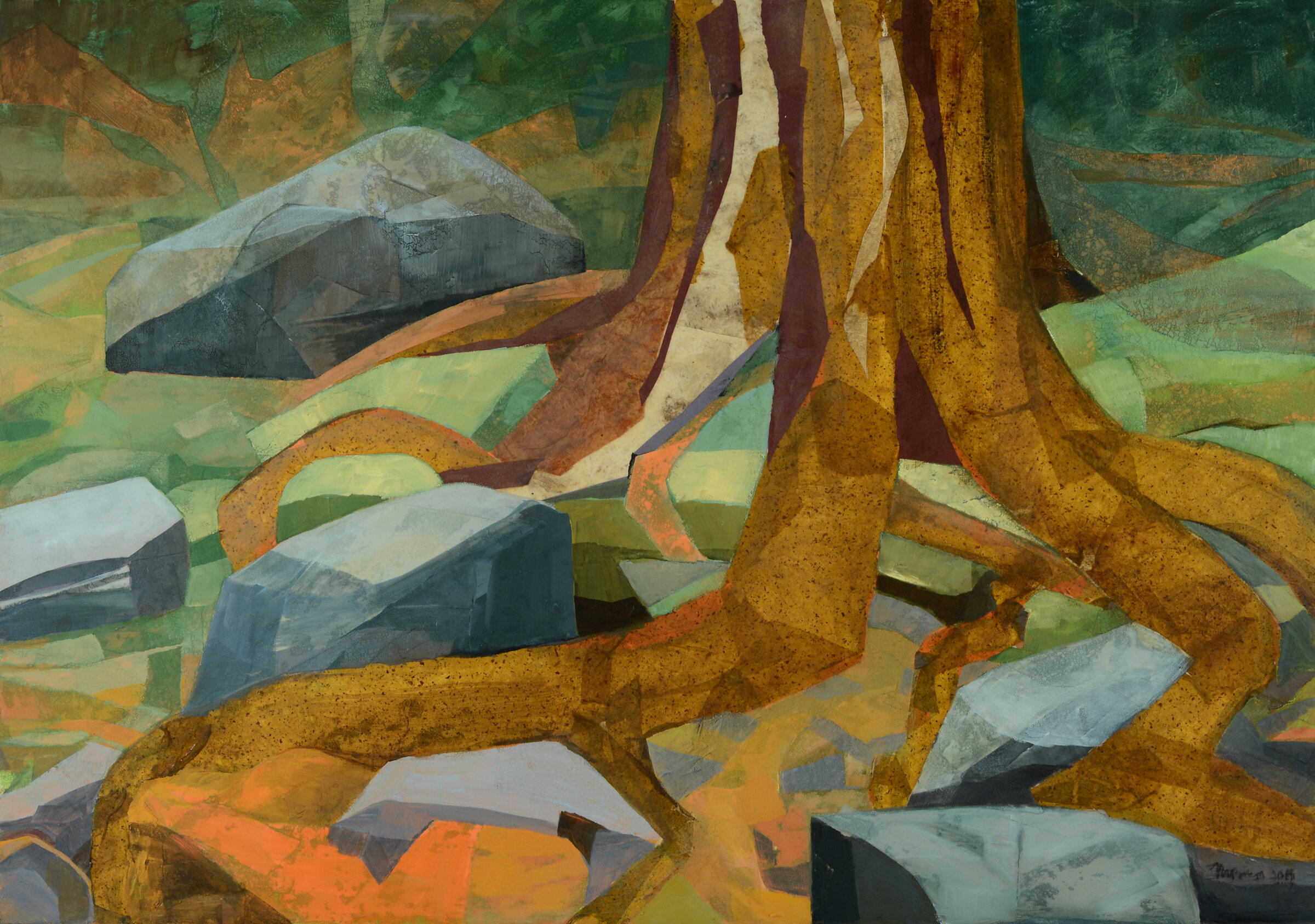 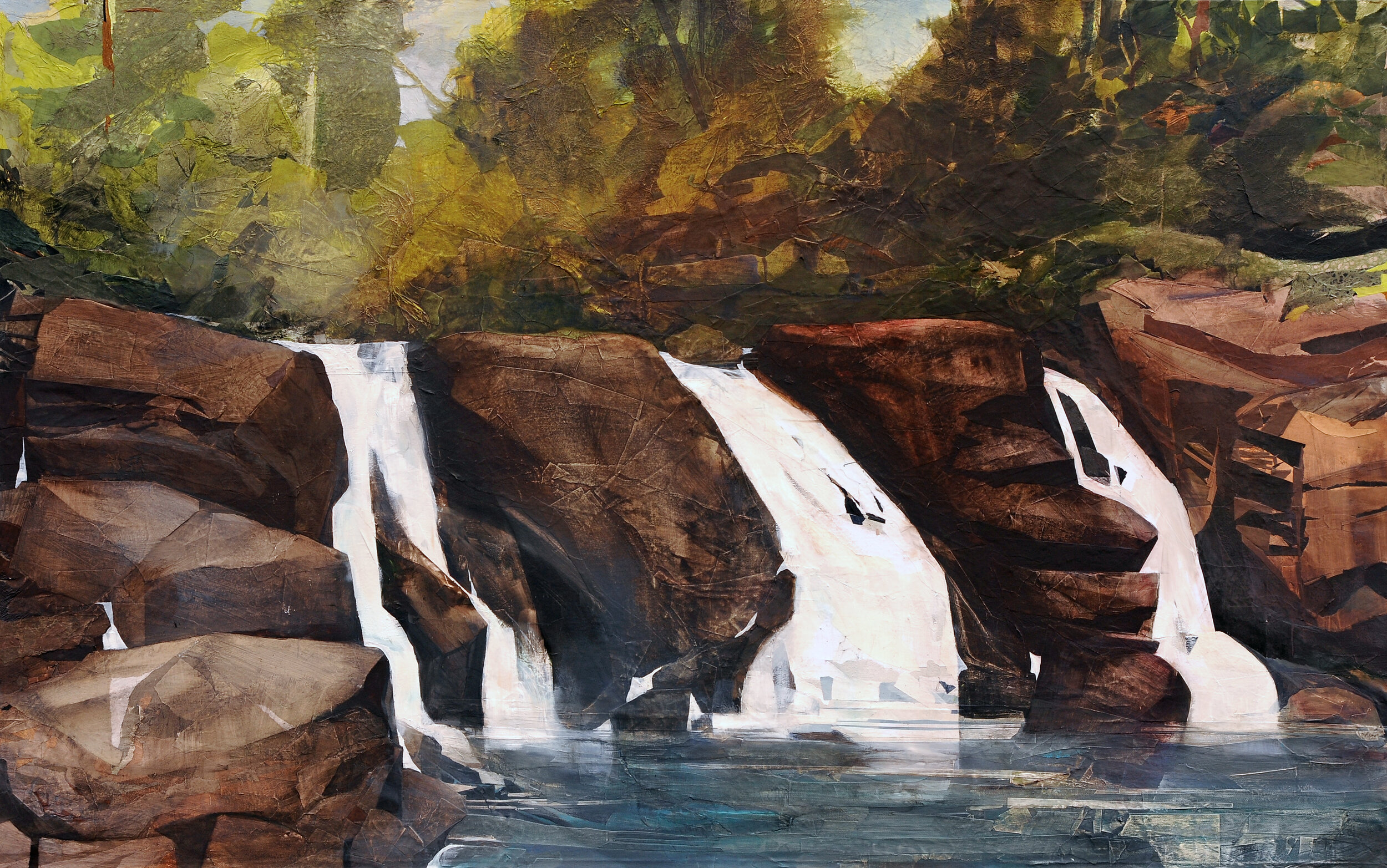 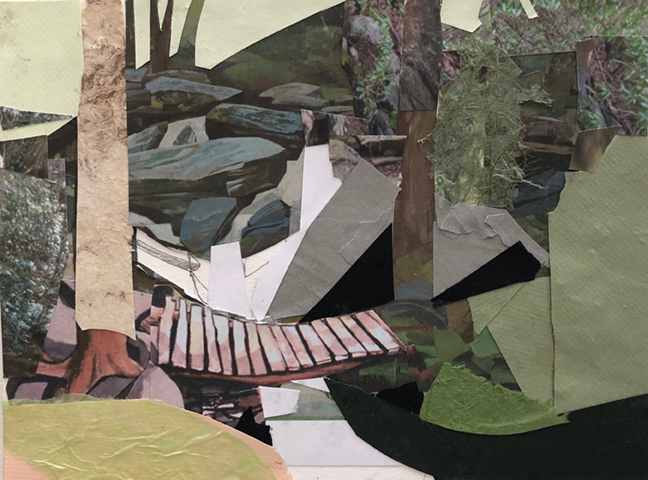 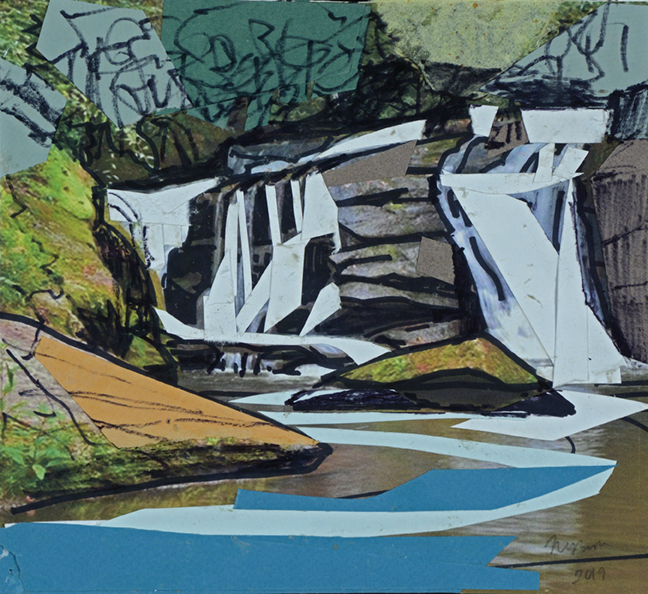 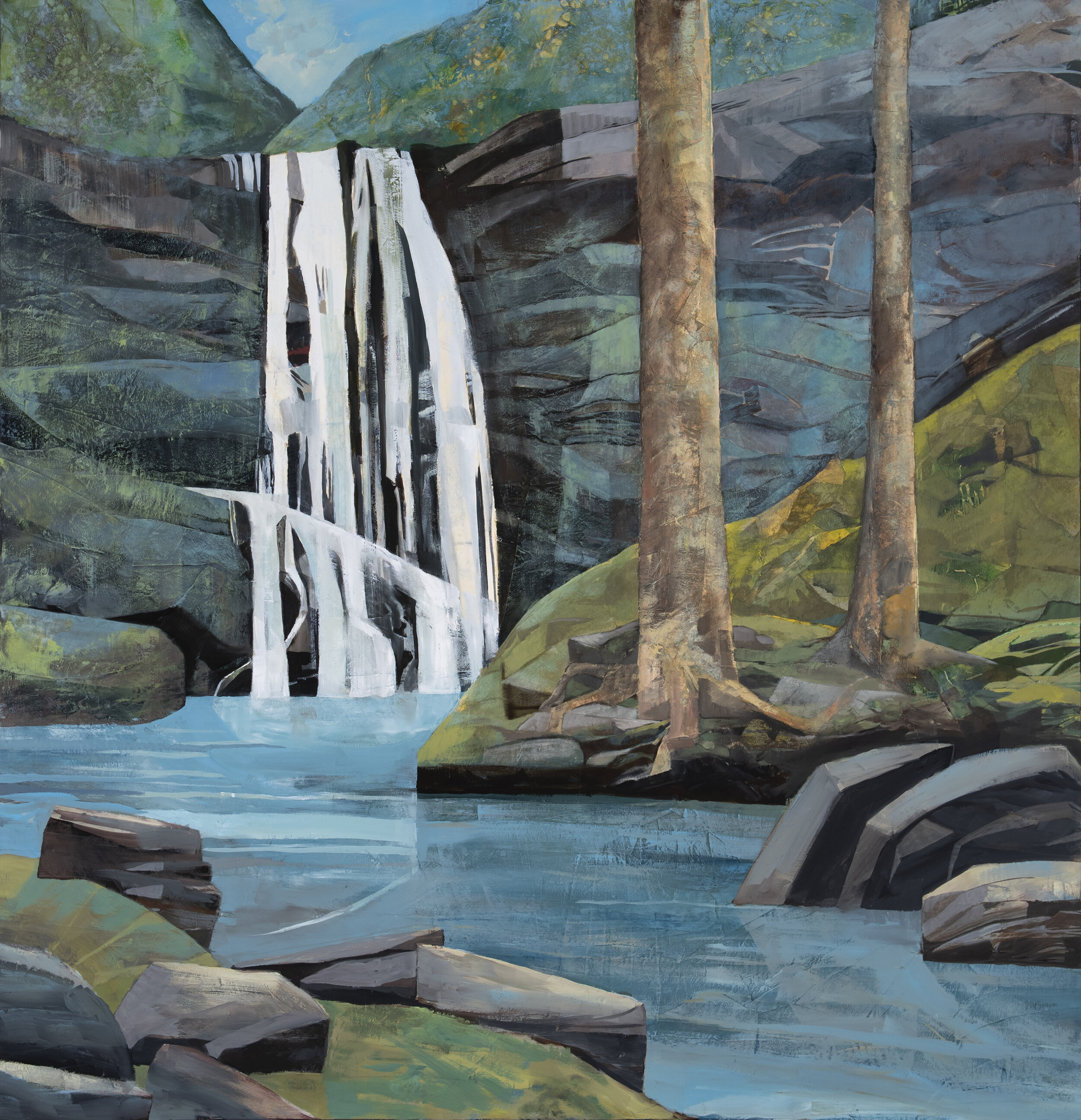 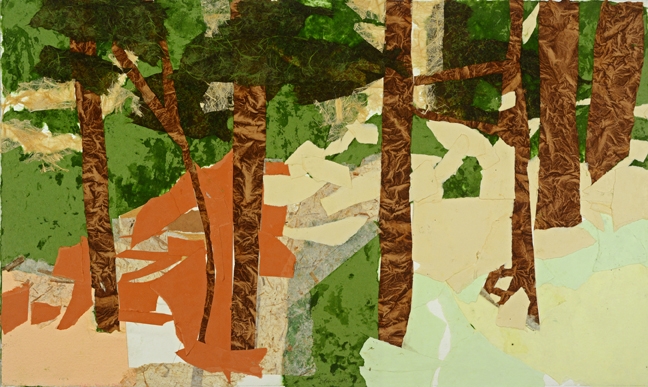 Born and raised in Northern Vermont, Mariella Bisson earned a BFA in Drawing from Pratt Institute in Brooklyn, NY in 1978. Her work has won many awards including three years of support from the Pollock Krasner Foundation (1990 and 2014/15) and a 2012 NYFA (New York Foundation for the Arts) Fellowship in Painting. Most recently, her landscape paintings won a grant from the Joseph Robert Foundation. She has also been awarded grants from the Gottlieb Foundation, Robert Rauschenberg’s CHANGE Foundation, the Artists Fellowship, The Dutka Foundation and the Vogelstein Foundation.

Her most recent solo show was a sold-out success at Momentum Gallery in Asheville, North Carolina. In the fall of 2020, a new solo show with will presented along with a major installation of sculptural glass by Dale Chihuly. Contact www.Momentumgallery.com for further information and images.

She draws and paints on site as a means of gathering visual information and cherishing the actual experience of place. Mixed media works on a large scale are made in the studio. Her travels have included more than 25 residencies. Among them are Byrdcliife, The Hambidge Center, The Banff Centre, The Vermont Studio Center, and The Santa Fe Art Institute.

Her paintings can be found in corporate collections including that of the Richemont Corporation, Philip Morris, Pfizer, Perkins & Cooie LLP, Wedge Capital Management, The Bessemer Trust, EKS&H - a financial services provider, Albemarle Corporation, Talisman, People’s Natural Gas, Dun and Bradstreet, Standard & Poors and many others. Her paintings are in several hospital collections including Memorial Sloan Kettering in NYC and New Jersey; The Mayo Clinic, Rochester, MN;  The North Georgia Health Service Hospital at Braselton GA; Fletcher Allen Hospital in Burlington, Vermont; The Jack Byrne Center for Palliative and Hospice Care at Dartmouth-Hitchcock Hospital in Lebenon, NH; Orange County Regional Medical Center in Middltown, NY, The Levine Cancer Center in Charlotte NC, and the Portland Oregon Fertility Clinic. Her works are in the collections of The Gelsenkirchen City Museum, Germany and in the Zimmerli Museum in New Jersey. Her artist books are in the collections of Museum of Modern Art, NYC • Franklin Furnace, NYC • Cleveland Art Institute • Women Studio Workshop National Archive of Artists Books Made by Women

Mariella works full-time in her studio now, but in the early years, while building up her own artistic practice, she was active as a curator and arts advocate/educator in Brooklyn, NY. She worked for ten years creating and directing the Visual Arts Program in Prospect Park (1983-1993) where she had the great pleasure of offering significant opportunities to artists to create site-specific sculpture within the interior spaces of Memorial Arch. The program is no longer offered. Over the years, artists including Fred Wilson, Boaz Vaadia, Florence Neal, Alison Saar, Robin Hill, Nancy Azara, and Mel Edwards were shown in the Park. In 1985, Mariella began the exhibitions program in the Boathouse Visitor Center ( now the Audubon Center) in Prospect Park. She was curator for eight years there and showed painters, printmakers, and sculptors. Artists including Ed Rath, Whitfield Lovell, Carol Sun, and Harvey Dinnerstien showed their works in the Guastavino-tiled gallery. Outdoor sculpture walks were offered each year and gave artists a chance to make their work for the landmark park. Outdoor sculptures were sited by artists including Tom Bills, Deenps Bazille, Doug Hopkins, Florence Neal and Tim Watkins.

Additionally, Mariella founded an art space in ONE MAIN, a prominent building in DUMBO, Brooklyn. For ten years, 1985-1995, she organized site-specific artworks in the interior corner space of 2500 square feet and adjoining tall display window. Artists who showed there include Harry Gordon, Larry Steele, Jackie Brookner and many others.

Mariella worked as arts administrator/assistant for Bill and Mary Buchen's Sonic Architecture, for Mark DiSuvero's studio SpaceTime Constructs and was the first Coordinator for Education at the Socrates Sculpture Park.

Mariella's works are represented by galleries and art consultants nationwide.